Exciting news- here at Midtown Yoga Kitchener-Waterloo we will be running a plant-based transformation program in July! It will be a 30 day program that will inspire positive change in your diet and lifestyle. The carefully planned recipes and meal plans encourage you to try out new, healthy recipes every week; make mindful choices about your eating; and experience benefits to your overall health and wellbeing. 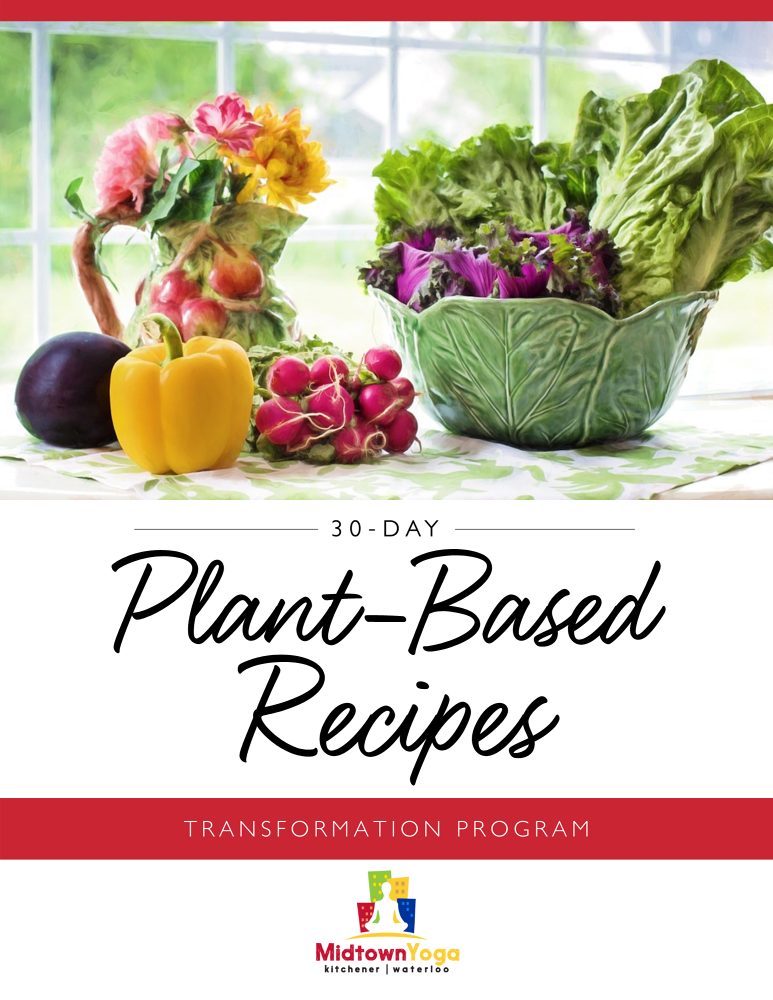 Did you know Midtown Yoga studio owner Rebecca has been living a plant-based lifestyle for almost 5 years now? For this week’s blog post, she shares her insights about living a plant-based lifestyle and shares details about her transition into veganism, obstacles, advice for those looking to try it, and favourite food ideas! If you're thinking of joining out plant-based transformation program, there are tons of tips you'll want to read in this interview!

How long have you been vegan, and did you have any experience with veganism/vegetarianism before you switched to a plant-based lifestyle?

For me, it was a gradual integration of more plant-based meals into my diet. I have been eating more of a plant-based diet since about end of 2015 - beginning of 2016. I went fully vegan in October of 2016.

I started off in 2015. First of all, I was having really bad stomach issues relating to dairy so I decided to take out the majority of the dairy in my diet and started simply having more plant-based milks, eliminating some of the foods that were really upsetting my stomach. So that’s where it really began in the fall of 2015. And then I started travelling and I decided that I didn’t really want to eat meat while I was travelling. The only places maybe I would be is if I was at somebody’s home and they offered me food. So I decided that I would live that way, that I would have maybe some meat occasionally, every other week or something like that.

Then I came back home from travelling and I decided that I was just going to eat more organic meats. I started researching farms and would locally source my meat. And then at the end of that summer I just decided: for me, I don’t need to consume dairy or meat and I made the decision to go fully vegan in October of 2016. 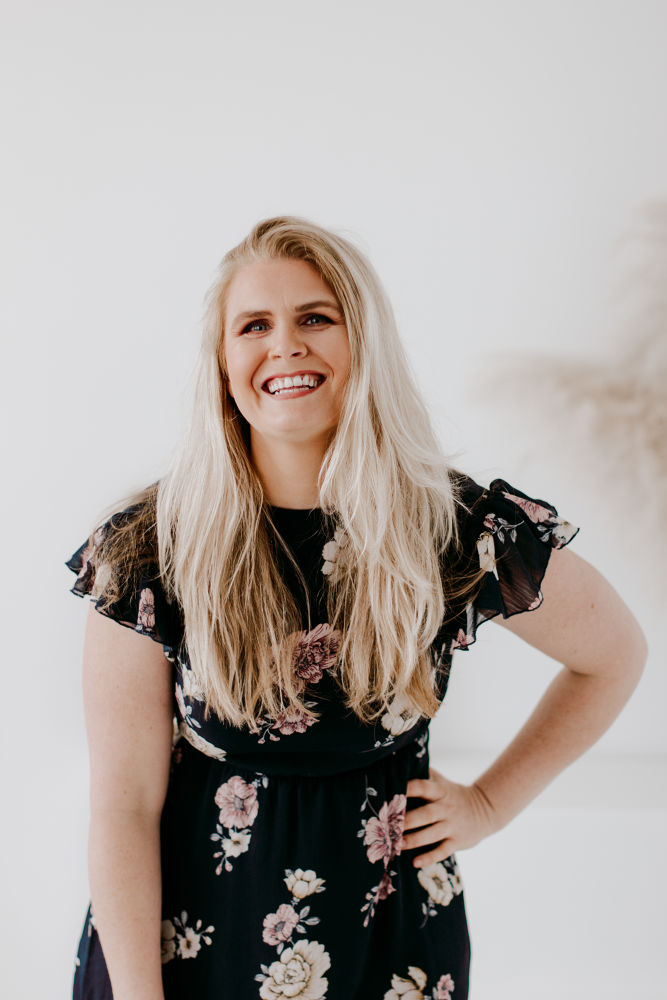 What was your perception of veganism before you tried it for yourself?

“Vegan” wasn’t really on my radar during my 20s. It wasn’t really something that was talked about. It is becoming a more popular way of living now that there are so many more options for alternatives to dairy and meat.

Before I became vegan, 100% I thought it would be too hard… it would be too challenging… that there’s no way that I would be able to give up certain foods. I didn’t really know anybody who was vegan prior to stopping my consumption of meat and dairy so I didn’t really think that it was something accessible. So that was kind of my perception of it before I went vegan.

So you mentioned that stomach problems were one of the reasons you stopped eating dairy. Did eliminating dairy first of all with the health issues you were experiencing and did you notice any other positive benefits of eating plant-based over time?

Yes- it did help a lot. I think that when I was getting an upset stomach from dairy I had for some reason started overconsuming dairy. So originally, I started eliminating some foods, some times. I would still partake in going out with my friends for pizza. I would still occasionally go for ice cream. But I just wasn’t consuming it all day every day anymore. So I definitely noticed that I was feeling better. I did a bit of an elimination diet by myself- I just became aware by asking “what is causing me to feel this way?” As soon as I didn’t have three dairy items in a day, I wouldn’t wake up feeling essentially sick to my stomach the next day. So that was a big improvement that I found.

My favourite vegan meal is something called Spicy Peanut Tofu. It’s really easy to make and it can have a lot of variety to it. The sauce is six ingredients- peanut butter, maple syrup, soy sauce, ketchup, vegetable broth and hot sauce (as much as you want!) That’s the base of the sauce. Then I normally use tofu, mushrooms, cauliflower, onions, peppers and then put it on whatever kind of base I want. I would say that is my favourite vegan meal, especially that I make myself at home. 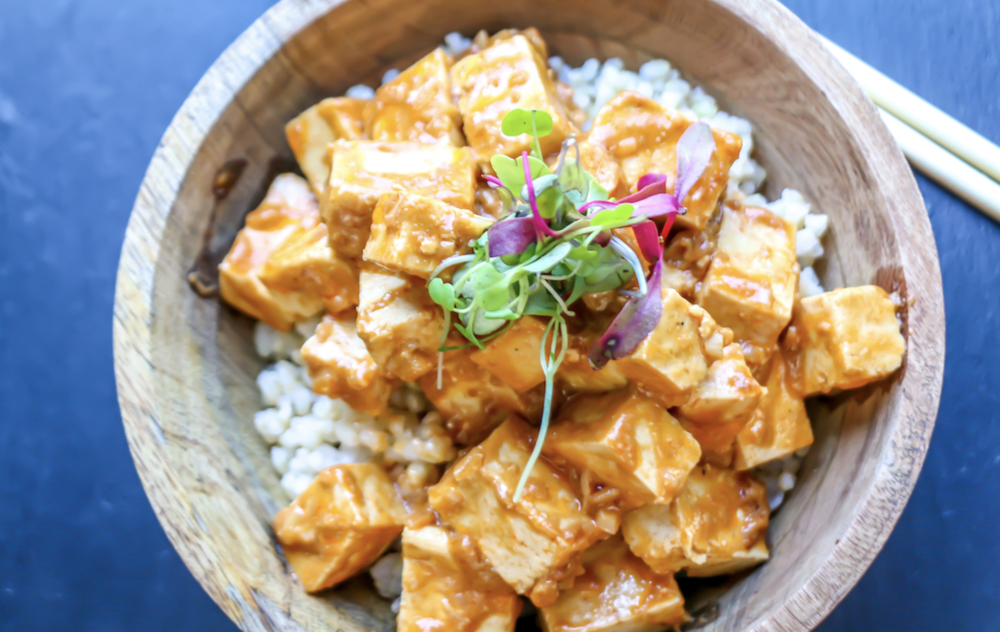 What is your favourite vegan snack? 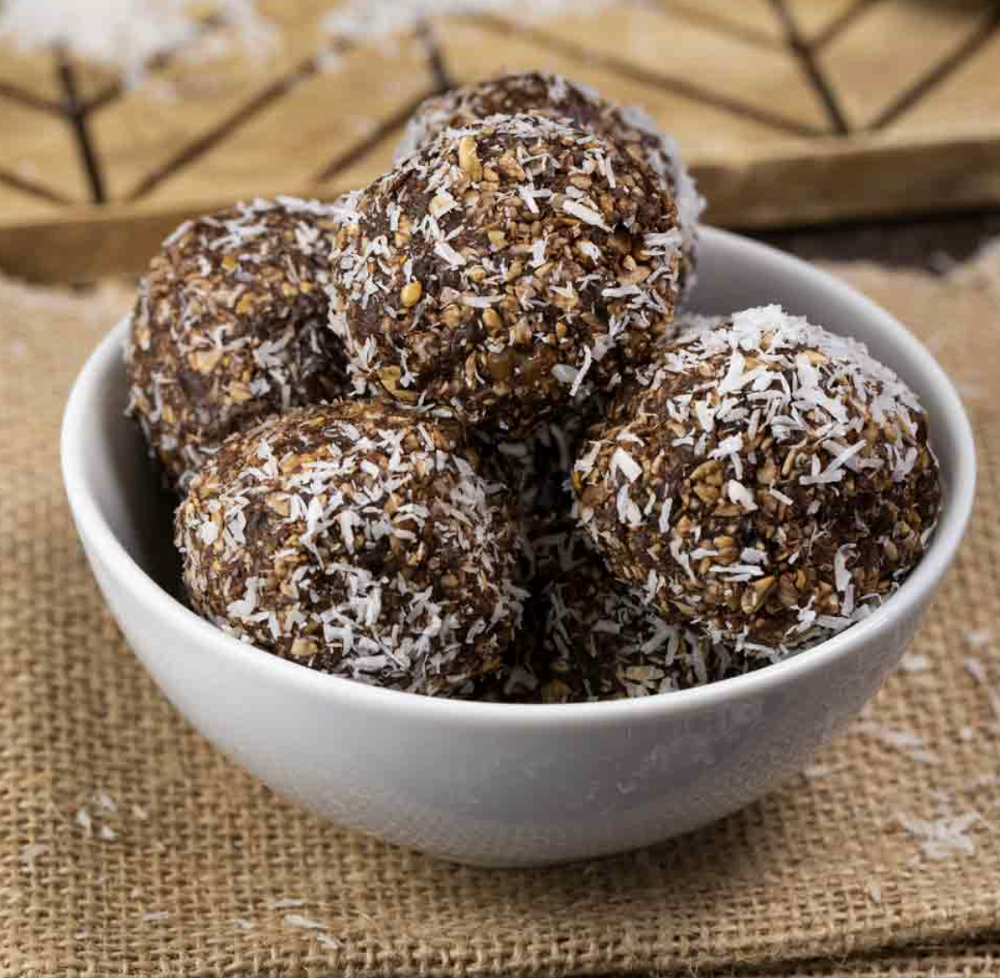 And a favourite treat?

And then my favourite plant-based treat that I make… Recently, we made these little “snickers” bars with dates and almond butter, peanuts, and a chocolate sauce so I think that’s probably my favourite one right now. (Check out our Vegan Snickers Video here for info on how to make this quick & tasty treat!)

What was the biggest obstacle you faced or continue to face when it comes to a plant-based lifestyle? What did you do/have you done to overcome it?

I would say that the biggest obstacle was societal. When I started to become vegan, I worked in an industry that wasn’t super accepting of the lifestyle, however I did find a handful of people that did support the transition and we were just able to soundboard off of each other. We would start sharing what we were doing, what types of meals we were having, and then it actually became a lot easier.

So how I overcame it was just making sure that I communicated why I was doing what I was doing, and then reached out and found people who were doing something similar to me. And I found that people became even more accepting. When I would go to events, I was bringing my own food but then bringing extras- so that people can try it and see how tasty it is, to see how easy it actually is to adopt a plant-based lifestyle. 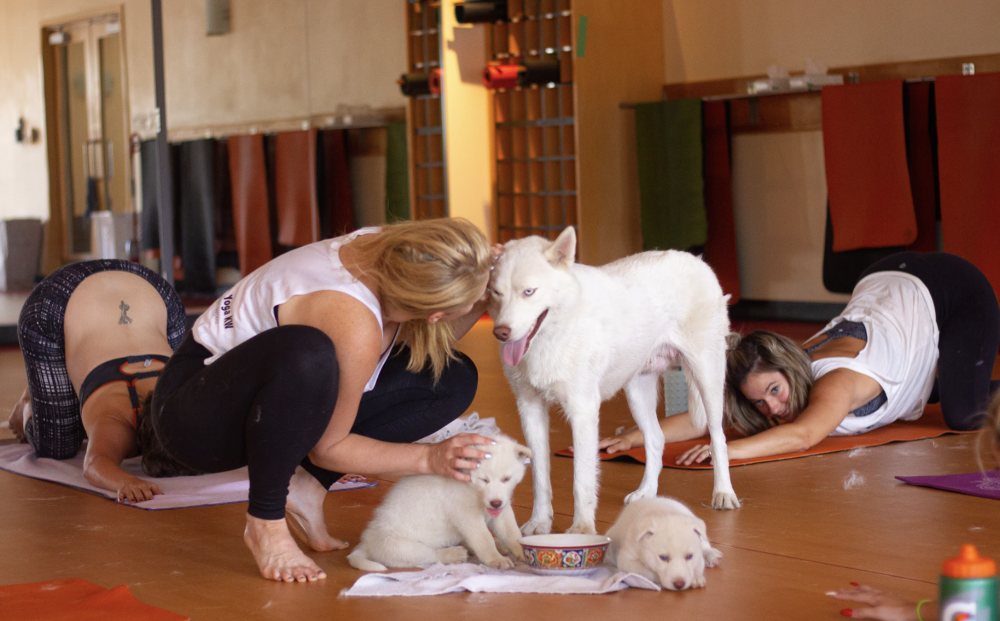 If you could give one piece of advice to someone who is trying out a plant-based lifestyle, what would it be?

I think it’s really nice to start incorporating it into your life. I know a lot of the time we have a hard time when we think of things in black and white. We think “I have to do all of this right now in order to change something.” I think it’s really helpful when you just start to incorporate small changes on a daily basis into your life. It did take me about 18 months to go from taking out a lot of dairy in my diet to eliminating everything completely. During that year and a half, I was able to first start to warm up my friends and family to the idea of it. To just start creating different options of what I would eat on a daily basis. To gather those 10 easy recipes for breakfast lunch and dinner. And then I started to incorporate more and more of that into my day to day life. I think that the biggest thing that you can do is take it slow and reach out to others for support.

I had originally joined the Vegans and Vegetarian Society of Barrie when I became vegan (because that’s where I was living) and I met some people who were incorporating the same types of practices into their lives and that definitely made it a lot easier. I was able to connect with people, we would share recipes, we would get together for potlucks and stuff like that. So then you just start to have the opportunity to know like minded people who are doing the same thing. And then you get lots of great ideas for what you can eat and you find out it’s really not that hard!

If this interview piqued your interest in trying out a plant-based diet, you should join our 30-day plant based program! It's an easy way to dip your toe into the water of plant-based living- everything is prepared for you: from meal plans, to recipes, to grocery lists, to macros & nutritional info! PLUS you'll get to connect with other members who are doing the program as well. Like Rebecca mentioned, having support is an important factor when you make a lifestyle change like this. Join this program and you'll get to connect with, inspire, and be inspired by other members; making this transition effortless!